Soren is now getting into everything. He got under the sink and dumped out the powdered cleanser (it was on a shelf in the back, he had to climb into the cabinet to get it). Today Dave opened the back door of my house to come in and Soren ran so fast that he was out before Dave even started to close it. He has a strange attraction to my drawers full of files and every time I am sitting at my desk I turn around and catch him dumping the contents of yet another file onto the floor. He also makes a beeline for my thread and bobbins drawer… just when I almost had Jireh trained to stay away from this stuff, I have to start all over again with Soren. Alas, though, he is still not talking at all. He makes several caveman-style grunts that usually don’t mean anything, but sometimes can be loosely translated into words. He also loves getting dressed and undressed, especially shoes.

Miriam’s new favorite phrase is “or somethim.” Putting her to bed just now she said “I’m going to take a nap [they still call going to bed ‘taking a nap’] and then I will wake up and you will make waffles.” I kind of wrinkled my nose (we had waffles a couple of times this week already) and so she said “Or maybe pancakes, or somethim.”

Christina is gurgling, talking and smiling up a storm lately. She’s sitting in her bouncy singing to me now, actually. Kind of a “gotta be there” thing, though. So here’s a visual. I wish I had video recording with sound on my camera, but this will have to suffice. 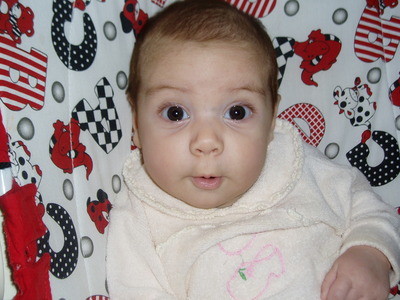 Dave’s at IHOP tonight so it’s off to watch a movie for me. ‘Night!

This entry was posted in Uncategorized. Bookmark the permalink.